All young people should do sport. It is fantastic for musculoskeletal development, helping create resilient joints that will stand up to the rigours of day to day life without pain or injury.

But there is a problem with sport-specialisation.

Choosing and sticking to one sport at a young age carries with it a significant injury risk.

A recent study of American collegiate athletes (Alqhuist et al, 2020) looked at the injury rates of 232 athletes, participating in a range of sports.

They found that those who specialised in a single sport before the age of 14 had 20% more injuries than those who participated in more than one sport.

The researchers found that this theme continued through college (up to approximately 22 years of age), with early-specialisers having three times the risk of multiple college injuries.

This paper echoes results from UK based research which has found the same increased risk to early sports specialisation.

At this point, you may be thinking that the increased injury risk could come from a higher level of performance that has resulted from early specialisation.

This idea is very intuitive. If you are excelling at a sport at a young age there will be a tendency to specialise, and by specialising you increase your chances of reaching higher levels within that sport, and therefore have a higher injury risk.

But the Alqhuist paper also looked at the likelihood of attaining college scholarships for sport (a measure of high performance) and found that there was no statistically meaningful difference between athletes who specialised at an early age and those who did not.

So from this paper it would seem that early specialisation does not lead to higher levels of performance.

Early sports specialisation carries with it an increased injury risk and does not lead to higher levels of sporting achievement.

The hypothesis for why early sports specialisation may not be a good thing is that every sport has slightly different demands.

By participating in several sports, athletes condition their bodies to cope with more types of demand, leading to a stronger and generally more resilient athlete.

This is particularly important during the growth phases of childhood and adolescence.

The balance required for a roundhouse kick can come in really handy when returning a tennis serve. The speed built training for the 100m will be an advantage on a rugby pitch. Or, the hand eye co-ordination gained from playing table tennis can transfer across to catching a cricket ball in the slips.

To make the most of a young athlete’s potential they should be encouraged to perform as many sports as possible for as long as possible.

This will build a more resilient athlete, with a wide skill-base.

It will also help maximise the other benefits gained from sports; the enjoyment, social interest and communication skills.

There really is never an age when specialisation should become a goal.

As athletes progress higher up the performance ladder, a particular sport will naturally take more of their time, but effort should always be made to maintain other disciplines.

- Back to Sports Injuries Articles - 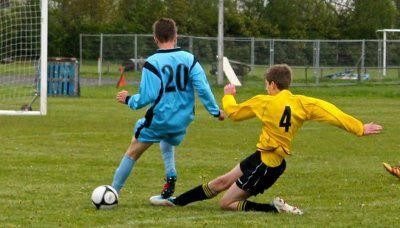