Arthritis can refer to many different conditions and often patients aren’t fully aware of what kind of arthritis they have. The statement that somebody has arthritis should never be issued without clarification about which type of arthritis this refers to, as the prognosis and management differ significantly.

It isn’t possible to fully explain the different varieties of arthritis here but, given how common the condition is, the information below may help some patients suffering from arthritis understand their symptoms a little better.

By far the most common type of arthritis, this is typically associated with increasing age. It is, however, incorrect to say that osteoarthritis is caused by age or to use the phrase wear and tear as a synonym.

Osteoarthritis occurs in response to repetitive micro-traumas (small knocks and wobbles) to joints. These usually follow a decrease in muscle strength and coordination, hence the correlation with age.

The most common joints affected are the knees and hips, closely followed by fingers and the spine, although osteoarthritis can affect any joint.

Symptoms typically start very gradually, progressing over many years. Even severe osteoarthritis will fluctuate from day to day, and can be worse at certain times of day; typically in the early hours of the morning.

Joints can appear swollen, although should not be red or particularly hot. Some minor deformity of joints is common as osteoarthritis becomes severe.

Osteoarthritis responds very well to conservative management, and other options are plentiful should this not be the case; hyaluronic acid injections, joint debridement and joint replacement for example.

Rheumatoid arthritis is a very different condition to osteoarthritis. It is thought to be caused by an autoimmune response, although the exact process is not fully understood.

Rheumatoid arthritis affects women slightly more commonly than men and usually initiates between the ages of 40 and 50 years, but can occur at any age between 20 and 60.

Joints membranes swell, leading to stiffness, pain and deformity. This happens on an episodic basis, with sufferers experiencing flare ups lasting weeks to months interspersed with periods of decreased symptoms. Over time damage to joints can occur, leading to symptoms becoming more consistent.

Symptoms most commonly affect the knuckles or wrists, and typically occur symmetrically. Joint swelling, redness and deformity are common. Other symptoms such as fatigue and sweating can occur.

Unfortunately, treatment is purely about symptom management as there is no cure. Medications are relatively effective at controlling flare ups and include Methotrexate, Sulphasalazine and Etanercept. Chiropractic treatment can help manage muscular and mechanical problems resulting from flare ups, but is not effective for the underlying rheumatoid arthritis.

This used to be known as Juvenile Rheumatoid Arthritis, but more recently has been discovered to be a slightly different process. Idiopathic is a way of saying that the cause is unknown. This type of arthritis only occurs in people under the age of 16 and affects girls more often than boys.

Reluctance to use affected joints, or limping, are usually the first presenting symptoms, followed by swelling and, in some cases, joint deformity. Pain tends to be worse in the mornings and fairly consistent over a period of weeks/months. Lethargy is also a common symptom.

Treatment includes Methotrexate and non-steroidal anti-inflammatories. JIA is not a lifelong condition and most children recover completely.

Manual therapy is very important throughout the duration of the condition to prevent lasting damage to joints and should be carried out by a specialist physiotherapist or occupational therapist. In circumstances where joint deformity occurs chiropractic can be very helpful once the inflammatory stage of the disease has settled.

Psoriatic Arthritis is similar to rheumatoid arthritis but occurs in the presence of the skin condition psoriasis. Approximately 30% of psoriasis sufferers are affected, but there is no correlation with the severity of skin symptoms and the likelihood of arthritis.

Redness, swelling and pain of the end joints of the fingers or toes is the most common symptom, and typically starts between the ages of 20-50 years. Finger nails are pitted in most patients. Lower back pain is also relatively common. Symptoms usually flare and remit periodically.

Treatment is similar to that for rheumatoid arthritis. Manual therapy is not widely used.

SLE, or Lupus, is another body-wide condition. Again, the origin is unclear but is thought to be autoimmune in nature.

Presentation is very similar to rheumatoid arthritis, with the small joints of the hands and wrists being affected on both sides at once. Other symptoms are common, with a facial rash being the most definitive. Fever and fatigue also occur, as does generalised muscular aching.

Anti-inflammatories, immunosuppressants and Methotrexate are common medications used in treatment. Manual therapy tends not to provide much relief from Lupus symptoms.

Pain on urination (urethritis) is usually the first presenting symptom, followed by conjunctivitis and then joint symptoms. Blisters in the skin and mouth are common.

Joint pain affects the ankles and heels most frequently, and less commonly the knee or lower back. This can last for several years. There is currently no treatment apart from pain relief. 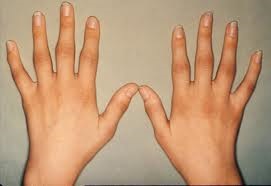